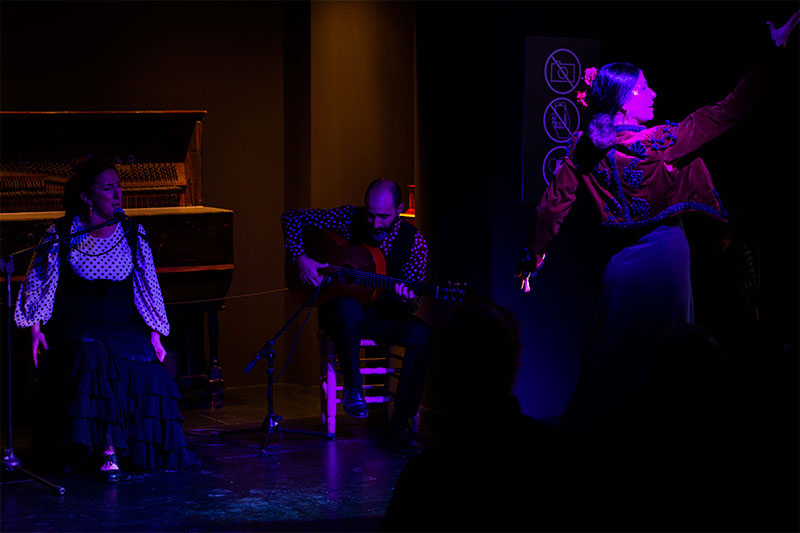 Flamenco is an art that originated in Andalusia in the 18th century that mixes dancing, singing, and guitar playing. However, it should be noted that in its beginnings, it had no musical accompaniment and was performed as a purer type of flamenco, called “cantes primitivos” or “cantes a palo seco.” It was granted the title of “Intangible Cultural Heritage of Humanity” by UNESCO in 2010.

In the beginning, the main focus of flamenco was only on the singer’s voice, but little by little the passion and emotional power that the dancers exuded during their performances attracted the attention of the audience. The dance began to gain prominence during the performance as it never had before.  In a flamenco show, the bailaora or bailaor (flamenco dancer) performs with smooth and elegant movements of the arms and sharp postures of the body, which are sometimes contrasted with zapateos (rhythmic stomping) or turns.

Regarding duets, they are generally performed by a man and a woman and are very intense and emotional dances, where passion, emotion, and tension play a very important role.

It was with the tonás, martinetes or saetas that flamenco began to have an audience; leaving the houses and reaching the patios and taverns, and with it, came the music and soon after, the flamenco dresses. Flamenco dancing reached its peak.

The moment when the dancing begins is called the salida. There are many ways to start this dance, including with a falseta, a melodic section with no singing, or suddenly entering, just after the cantaor starts to sing.

After this comes the central part of the flamenco dance. Throughout this part of the dance, the dancer marks the tempo and the accents with their feet and arms to the rhythm of the cantaor, known as marcaje or “dancing the lyrics,” surprising and energizing the spectators watching the show.

The paseos, happen when the artist moves around the stage. Also, we can see the mudanzas, which are movements that the dancer makes without moving on the stage. In the latter, they include all types of movement with their bodies except for zapateo or taconeo.

After the singing, comes the escobilla. The escobilla is the part in which a rhythmic composition is performed accompanied by a zapateo. As the escobilla comes to an end, the dancer increases the rhythm of the zapateo until finishing with a remate.

Finally, the cierre. The flamenco remate occurs when the bailaor or bailaora executes a series of rapid movements that are accompanied by certain gestures and zapateo.

There are more than 50 different flamenco palos; illustrating the variety and richness of this Cultural Heritage with Andalusian roots.

You can see below the most famous and popular flamenco dances:

How to Dance Flamenco

You may ask yourself, “where do I start?” The answer is simple. If you are interested in learning how to dance flamenco, the best way to start is by training your ears to hear the rhythm and beat of the music. These rhythms will determine the type of dance it is, create counter-tempos, and emphasize the musical accents.

A fundamental part of flamenco that you will most likely not be able to perform is the zapateo. The zapateo is the rhythm and percussion that the artists create with their feet. The zapateo can happen in certain parts of the dance, in various combinations, and can be both brief and long in duration.

Nobody said it was easy to learn to dance flamenco, but with time, patience and perseverance, you will be able to master much of this artform.